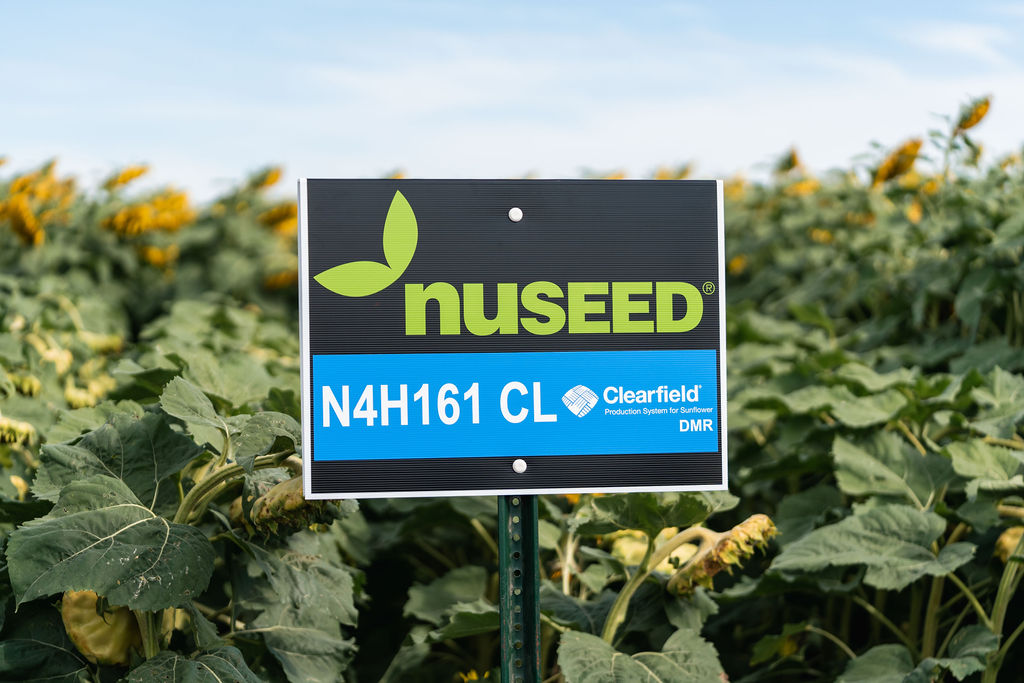 Alison Pokrzywinski, Sunflower Product Manager, North America, says that one definition of “ultra-early” in terms of sunflower genetics is expanded geography. “As you go further north, into some of the areas with shorter growing seasons, like Saskatchewan and Manitoba, or even into higher elevations in Montana, those areas can’t grow sunflowers because of the shorter seasons and fewer growing degree days. The ultra-early hybrid really allows us to expand the geography for sunflowers into those areas. Those areas that normally couldn’t plant a typical full season sunflower, now have the opportunity to do so,” she says. “And Nuseed’s N4H161 CL hybrid provides growers in those new geographies with the option to plant sunflowers without sacrificing yield.” Pokrzywinski says that the new hybrid gives growers in those areas the opportunity to plant in early May and have the sunflower crop off the field by late August – a growing season that affords benefits outside of geography and growing degree days.

“That growing season really allows producers to take advantage of premiums at the processor level,” she says. “What we see, especially in the oil and birdseed markets, is that there is an uptick in pricing because stocks are low and processors need to keep product coming in.”

Ultra-early genetics are also expanding the sunflower geography further south, into Texas and expanded acres in Kansas, a gain that can, in part, be attributed to increased and improved double cropping opportunities in those areas.

Sunflowers have excellent drought tolerance, so once the hurdle of germination is cleared, the crop typically sees a yield, regardless of environment. This fact alone makes sunflowers an excellent double crop option to follow wheat. The caveat: to reach maturity in such a short amount of time an early maturing, or ultra-early, hybrid is required. And because weeds can be an issue with limited post-emergence herbicide options, having a plan of action in place for control is essential.

The N4H161 CL hybrid is the complete package for growers who are looking to plant sunflowers as a double crop.”

If growers are in a double crop area, they probably haven’t ever double cropped with sunflowers because the maturity of most sunflower hybrids just won’t fit into a double crop situation. With the N4H161 CL hybrid sunflowers become a feasible option for growers,” says Nuseed Sunflower Breeder, Jeremy Klumper.

“Once we get into southern South Dakota and down into the High Plains, there’s a lot of potential for ultra-early products and the double crop can really go one of two ways. So, option number one would be that the grower plants ultra-early sunflowers early in the growing season, desiccates to get the sunflowers off the field and then goes in with winter wheat. That’s really a different way of thinking, something I would consider a newer concept for a grower to consider because they’re usually only thinking about option two, which is ‘What can I put behind my winter wheat’ – a harvest in wheat in July and then go in with ultra-early sunflowers,” she says. “There really is a lot of merit to the first option and growers should consider it.”

Utilizing wheat as the double crop and sunflowers as the primary, rather than the reverse, has been shown to improve wheat stands and yield. By drilling wheat directly into the sunflower stubble, more drifting snow is trapped, and erosion is prevented. Both of which prevent soil moisture evaporation.