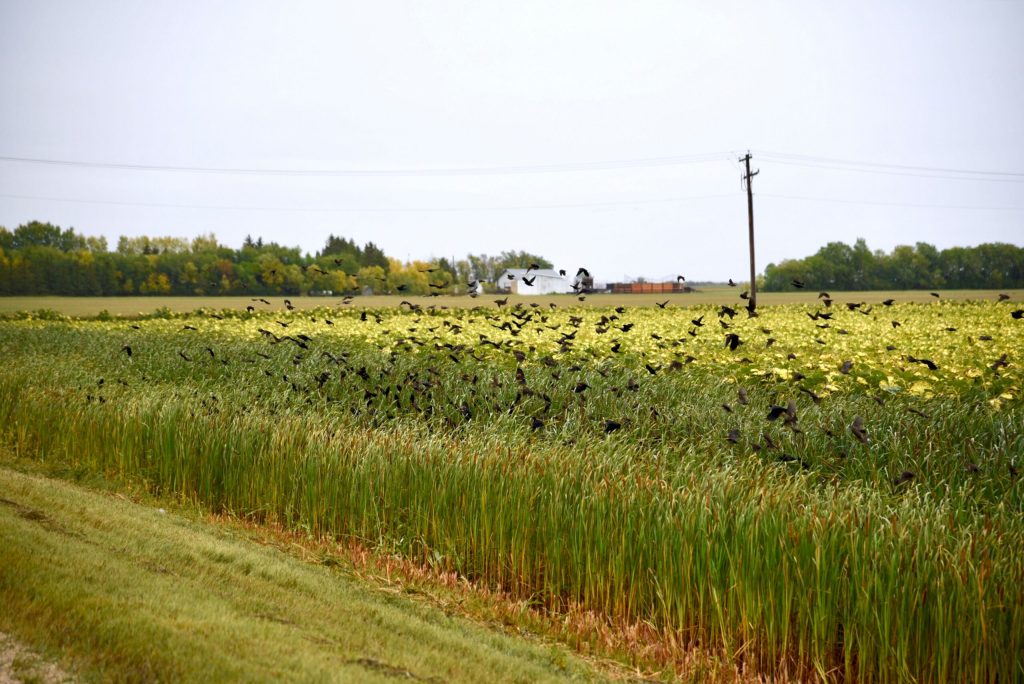 Blackbird depredation and damage has become a serious problem in areas of North Dakota. Recently areas around Bottineau, Crosby, Max and north of Minot have been hardest hit.

However, in addition to getting the crop off earlier by using a desiccant, there are other measures growers can take to discourage blackbirds from settling in their sunflower fields and eating their yield. Specifically, there are two registered bird repellent products on the market called Bird Shield™ and Flock Buster®, which contain natural ingredients. Farmers’ feedback to these products is mixed.

“Some growers like them, some don’t. Sometimes it’s effective and sometimes it’s not – it’s hit and miss,” according to Pokrzywinski. “Some growers have to spray numerous times, which costs not only in product but [aerial] application can really get up there in price.”

Pokrzywinski knows growers who are using drones to scare blackbirds away from sunflower fields. She’s also aware of a study underway by North Dakota State University and the USDA-APHIS-WS National Wildlife Research Center that’s testing the efficacy of deterring blackbirds with drones that look like hawks.

Propane cannons are also being used by growers to keep blackbirds away from their fields. Some growers find them effective; however, the noise only carries so far. “If you are in a 320-acre sunflower field, you’d need a lot of propane cannons. It works on a smaller scale,” says Pokrzywinski.

Blackbirds are also drawn to cattails, so some growers remove the cattails to try to reduce blackbird populations. A tactic tried by others is monitoring sunflower fields close to cattails or sloughs where blackbirds like to roost at night. Shot gun fire while blackbirds are roosting, or coming into roost, may provoke them to leave.

July to Mid-August is a prime time to remove cattails before blackbirds move in and start roosting on them near sunflower fields.  The can either be cut down or sprayed with herbicide. Visit ND Weed Control Guide — NDSU Weed Science for more information on using herbicides

In addition, the National Sunflower Association is helping fund research on the use of Avipel® (active ingredient is anthraquinone) on sunflowers as a blackbird repellent. It is currently used on seed corn as a pheasant deterrent in North and South Dakota.

Rather than relying on only one way to deter blackbirds from gathering in their fields, growers may find the most effective way to reduce blackbird damage is by combining several methods, says Pokrzywinski. “There seems to be a lot of small options, and you hope by combining them you can tackle the big problem.”