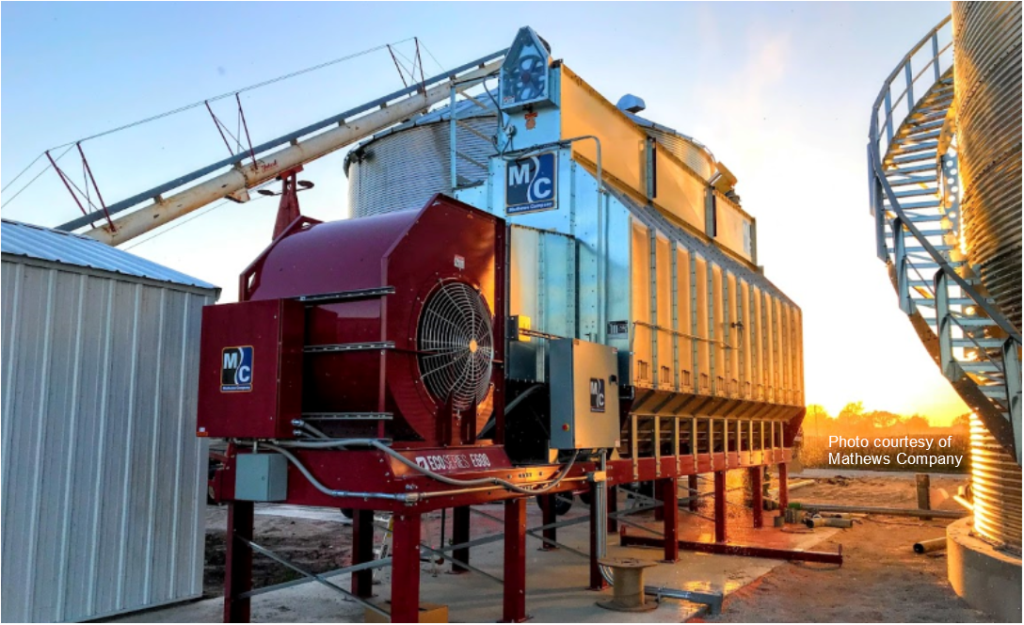 Ultimately, drying and storing sunflowers is a balancing act.

Oilseeds must be at eight percent moisture or a little lower, he says. However, in some cases, the moisture content needs to be even lower.

“The eight percent is associated with a 40 percent oil content of the seed. Now, we’re seeing oil contents closer to 45 percent, which is good from a marketing and oil production standpoint, but it also means the storage moisture content needs to be lower— somewhere between seven and eight percent,” says Hellevang.

Another, often overlooked, aspect of storage management is for growers to cover the fan or air duct when not in use. If the fan or air duct is left uncovered, when wind blows and hits that opening, the grain will be ventilated and warmed, much like running the aeration system.

Also, if either fan or air duct is left uncovered, a natural chimney effect is produced. “Both the blowing wind and this natural chimney effect will warm the grain in storage, which makes the grain more susceptible to insect infestations. Or if we’re marginal on moisture content, and a little on the damp side, it increases the potential for mold growth as well,” says Hellevang.

Managing grain in storage, especially as bins keep getting larger, can be challenging. Grain monitoring systems can help growers stay on top of moisture management, storage temperatures and grain conditioning.

Grain monitoring systems also offer growers many conveniences. From the combine or pickup cab, growers can monitor bin status on smart phones or computers, remotely shut fans on and off, change storage parameters, and a host of other storage functions.

Hellevang says grain monitoring systems are wonderful tools for growers; however, bins still need to be physically checked, he says. “It doesn’t eliminate the need for storage managers to be observing the bin: to use their sense of smell to try to determine if there’s off odors, or look for indications of condensation and other problems that might be showing up.”

In general, Hellevang recommends growers conduct a thorough evaluation of stored grain conditions every couple of weeks when outside temperatures are warm. In the winter months, stored grain should be checked every two to four weeks, he says.

“We get paid on how many pounds we deliver, whether it’s oil or confection seeds. The goal is to have it dry enough to store, but not too dry so that we start losing value in what we’re delivering to market,” says Hellevang.