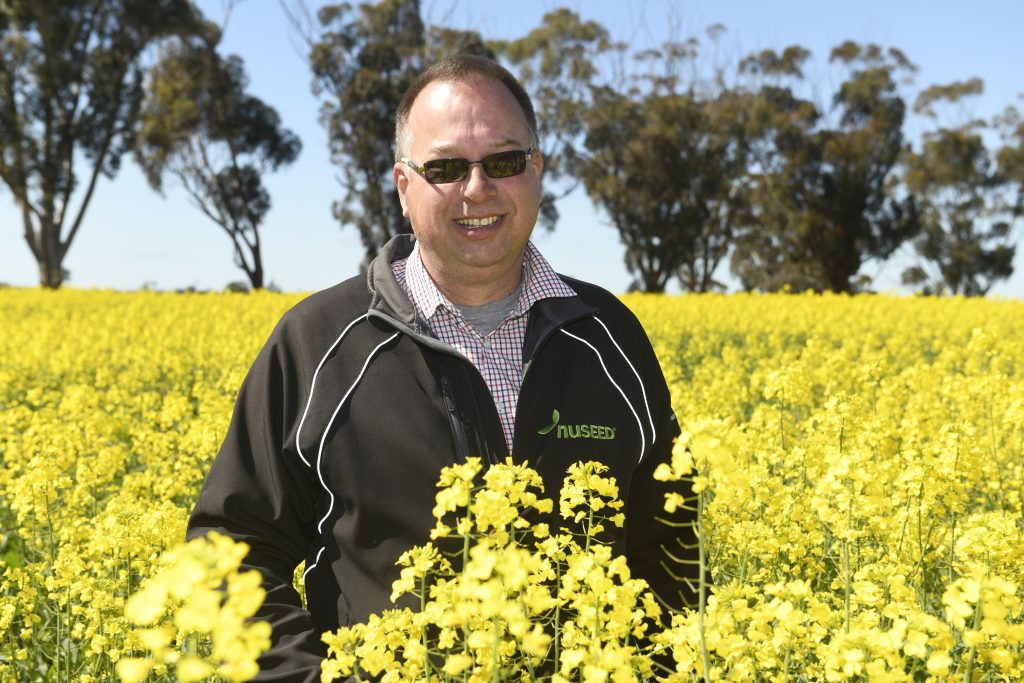 The 2019 Spring has seen the release of Nuseed Raptor TF a canola hybrid from Nuseed with the TruFlex® herbicide tolerance trait. .

He said it compared favourably with their benchmark Roundup Ready® hybrid, GT53 with a similar yield at the bottom end and a 10 per cent advantage under more favourable conditions.

“With the TruFlex technology in it you’ve got a wider spraying window that growers can use glyphosate over the top, for weed control.”

He said the crop safety of Nuseed Raptor TF was very good with glyphosate able to be sprayed until early flowering to achieve better weed control.

“In a year like this, it really shows up to be beneficial, especially when we’ve had staggered emergence of canola because of weather conditions,” Mr Suverijn said.  “That becomes a real problem for growers when, under the old system, they can’t spray past bud formation.  Now with the TruFlex they will be able to spray up to early flowering which gives them a much wider spray window.  It means they can still get on top of their weeds without a worry about crop safety or yield loss.”

The release of Nuseed Raptor TF is the latest in a long line of technologies Nuseed has brought to the Australian market place.

“Historically Nuseed was mainly a triazine tolerant, open-pollinated, canola business,” Mr Suverijn said.  “Some of the older varieties that people would know would be things like Cobbler, which was a major variety.  The next major one that we’d have in that space would be Bonito, which has currently got around fifty per cent of the WA planted hectares.  It is a significant variety.”

Back in 2009 Nuseed released open-pollinated, Roundup Ready varieties and then moved into Roundup Ready hybrids in 2011 and 2012.

“The first major one of those which took the mid-series market dominance was GT50 and then that was subsequently replaced in 2015/16 with GT53.  That’s still a benchmark today in the market,” Mr Suverijn said.

“When we’ve moved into our first hybrid TTs we noticed from our competitors that they were not getting adoption of hybrids,” Mr Suverijn said.  “We did a survey of growers and determined pretty quickly that part of the reason was the up-front seed cost.”

He said the business came up with a model that reduced the up-front seed cost of the hybrid in return for an End Point Royalty of $10 per tonne.

“We are releasing hybrids that are twenty and thirty per cent higher yielding, on average, than Bonito.  There’s definitely going to be value there for growers,” Mr Suverijn said.

“With the End Point Royalty, if the variety is good, they’ll keep growing it and they’ll deliver and declare and that brings benefit to us and the industry. We are re-investing that money back into the breeding pipeline, with the intent to deliver growers improved varieties.”

“If the variety is no good, the growers will stop growing it and then there’s no revenue from that variety.  It is a pretty fair system because it puts the pressure back on us to deliver the benefits back to growers.”

Nuseed conduct many variety trials across the country and have also included options to maximise yield though nutrition.

“One of the things that we observe in the field is that hybrids respond to better nutrition packages,” Mr Suverijn said.  “In some instances, the growers aren’t getting the best benefit out of the hybrid material because they’re not feeding it at a rate that is going to optimise the performance.”

He said at a site in Brookton, WA there was a visual difference in the performance of the hybrid canola with the higher rates of nutrition.

“I think growers would be looking to push up their average yields, maybe from 1.4 to 1.8 or two tonne to the hectare.  There’s no doubt that the new genetics and the new varieties have got potential for that.”

Mr Suverijn said he was proud to be involved in Nuseed  as an Australia company which had grown from 20 people to a global company of more than 300 people.

He was also proud that, “Our logistics, our customer service is the best in the business and we do that better than anyone. We have really good genetics. We are about 75 per cent of the genetic share in the WA market, through both our open pollinated and hybrid materials and our varieties are locally bred and adapted for Australia.”

“As a business we’re also looking at material that are actually “beyond yield”.  It is not just about what we can yield out of the paddock, it is downstream benefits as well.  One of the other programs is a specialty oil program called Monola® and you are basically producing speciality oil that’s got all the health benefits of a canola but with a frying life stability of things like palm oil. Downstream customers like KFC and snack brands are taking those products up.”

“As a business, we are looking at other avenues for “beyond yield” through our global JV’s in Omega 3 oils, biofuels and nutriceuticals.  There are exciting times ahead for Nuseed both globally and in Australia”