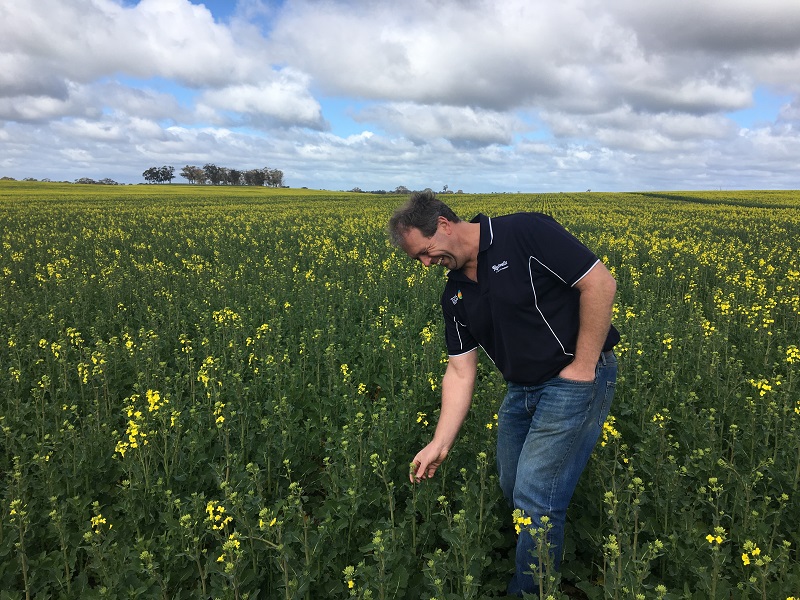 Budding new canola variety, HyTTec® Trophy, is showing all the right signs in the lead up to its commercial release next season.

“It has the potential to be one of the main canola varieties for central Victorian growers within a couple of years,” he said.

“Its maturity is perfect for this region and at this early stage in our trial, it’s looking likely to outperform two of our most popular varieties.”

The trial, hosted by mixed cropping and sheep farmer Anthony Collins, is comparing the performance of five hectares of HyTTec Trophy in a paddock of ATR Bonito.

Five hectares of ATR Stingray has also been sown in the paddock to provide a three-way comparison.

“The three crops were up and out of the ground around the same time, and while it didn’t have quite the same cabbage size as ATR Bonito and flowered a fraction later, it really started to look the goods at budding,” said Mr Coombes.

“The pods are bigger and there are more of them, so we’re pretty excited to see how it will go in terms of yield.”

The crops are likely to be windrowed in early November.

He said growers in the region have had a pretty good season, although June was relatively dry and frosty.

“I work with growers throughout central Victoria, from Maryborough to Pyramid Hill and across to Colbinabbin and TT canola is still doing the job in most situations,” he said.

“Very rarely would I see a straight open pollinated crop or need to recommend a Roundup Ready canola variety.

“At the end of the day, yield is king, so if HyTTec Trophy can improve on the yields of the two market leaders, it will be happy days for a lot of growers.”

“The Trophy was showing outstanding potential alongside a very healthy looking paddock of ATR Bonito,” he said. “You couldn’t ask for tougher competition!”

This is just one of the sites where HyTTec Trophy is being tested this year before it becomes available for planting in 2018.

“I think the HyTTec pipeline will quickly become popular for its hybrid seed traits – strong vigour, a strengthened disease background and excellent yield performance – as well as the herbicide tolerance benefits of the TT system,” said Mr Loorham.

A full pipeline of hybrid triazine tolerant varieties are under development at the Nuseed Innovation Centre in Horsham, with HyTTec Trophy to be the first available.

“These new breed HyTTec varieties will be complemented by a range of current and future open pollinated varieties to provide growers with a comprehensive suite of canola choices,” he said.