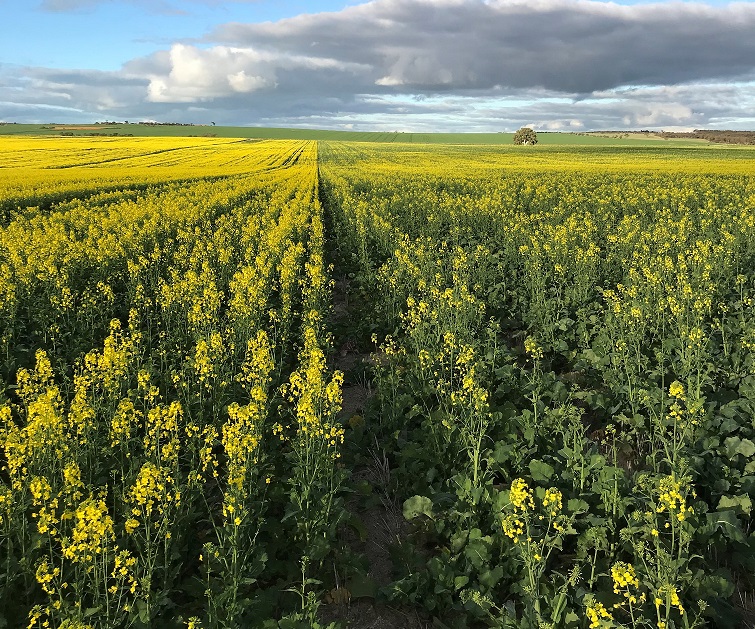 Nuseed Emu TF (left) sown 10th May next to 44Y27 (right) sown 20th April. Note that Emu has caught up and has a higher flowering percentage even with later sowing. Site North Kellerberrin. Photo 22nd July

Early sowing of canola has led to higher yields when using varieties with appropriate phenology, but with the introduction of Nuseed Emu TF growers can sow canola at more traditional sowing dates and match or even better the grain yield of early sown canola. In fact, early sowing of Nuseed Emu TF exposes the crop to a greater risk of frost, disease and lower yield compared with sowing at more traditional sowing dates.

To aid management decisions, it is important to understand that canola varieties are influenced by a mix of environmental factors which determine when a variety will reach certain physiological growth stages. These environmental factors include climatic factors such as mean daily temperature, cold accumulation (vernalisation), daylength and moisture.

Understanding how a variety is going to respond to the environment, allows us to target the optimum flowering window which will minimise the affect frost/heat/moisture stress will have on potential yield and performance. Sowing windows and emergence dates can be managed at a farm level to then target ideal flowering window for Nuseed Emu TF.

Nuseed Emu TF is a ‘spring’ canola variety that responds to temperature in a linear way, the warmer it is the faster it develops. When sown in late March or early April, development will be rapid and the crop will flower too early, exposing it to frost risk and disease risk that lead to potential lower yield. Many other Early/Mid varieties have a small vernalisation response which acts as a handbrake to slow them down when sown early.

For comparison on how fast Nuseed Emu TF can be on a May emergence:

Due to the speed of flowering when sown early, Nuseed Emu TF is highly susceptible to frost damage as the flowering window could be during the coldest period of the year, July to August. In targeting a flowering window of mid-August by changing our emergence dates (sowing window), the impact of a cumulation of frost events can be minimised while still giving the variety enough time to flower and pod up before moisture and heat stress begins.

Frost damage can influence the canola plant’s overall grain yield, oil content and oil quality during key periods of the plant’s physiological life. Damage can occur to canola plants during the flowering window and the pod/seed development window. The largest degree of damage to canola is during early pod development while pods have a high concentration of moisture, at this point damage is pod abortion. Frost damage later while pods have formed seeds is more likely to see damage to individual seeds and missing seeds in each pod, not full pod abortion.

DPIRD online point out the average frost incidences across the WA ag zone, of which points out that the central ag region has a higher chance of frost from August through to October and some zones historically are having more than 12 frosts events over this period.

* Please note the high-risk zones through the central growing region of WA. Data from DPIRD.

If you have any further questions around the timing and placement of Nuseed Emu TF on your farming system, please do not hesitate in contacting your local Nuseed Area Sales Manager to discuss.